The election cycle is finally over and the nation’s politicians are starting to prepare for the next round of lawmaking.  At the local level, the Hawaii State Senate and House of Representatives recently announced their leadership structure for the upcoming legislative session. 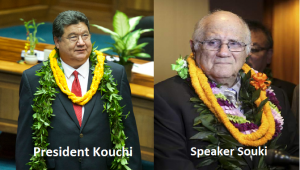 The Senate reaffirmed Ron Kouchi as Senate President and the House retained Joe Souki as Speaker.  Other leadership posts in both chambers will remain mostly the same:

(Other Senate committee chairs have not yet been finalized.)

For the House of Representatives:

(No House committee chairs have been announced.)